Home > Spiritual > God-Realization: The Heavenly Treasure of Individuals and Nations

God-Realization: The Heavenly Treasure of Individuals and Nations

(Excerpt from The Second Coming of Christ: The Resurrection of the Christ Within You, commentary on the words of Jesus in Luke 12:22–31) 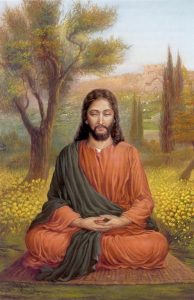 “Consider the ravens: for they neither sow nor reap; which neither have storehouse nor barn; and God feedeth them: how much more are ye better than the fowls? And which of you with taking thought can add to his stature one cubit? If ye then be not able to do that thing which is least, why take ye thought for the rest?

“Consider the lilies, how they grow: they toil not, they spin not; and yet I say unto you, that Solomon in all his glory was not arrayed like one of these. If then God so clothe the grass, which today is in the field, and tomorrow is cast into the oven: how much more will he clothe you, O ye of little faith?

The earth would be a veritable heaven if nations as well as individuals would heed Jesus’ admonition to make God the primary aim of life. When people concentrate on political and business selfishness for national and personal accumulation of power and luxuries at the expense of others, the divine law of happiness and prosperity is broken, creating disorder and want in the family, the nation, the world. If the leaders of different nations, instead of extolling aggression and patriotic selfishness, turned the minds of their citizens toward the acquirement of inner peace, love of God and neighbor, and bliss of meditation, then material prosperity, health, and international harmony would automatically be added unto the spiritual treasures of the nations.

Jesus pointed out the supreme wisdom of “God first” as the best recipe not only for individual happiness but also for national and international well-being: “The nations of the earth seek inordinately and selfishly after material prosperity and power, which inevitably leads to hurtful inequities, wars, and destruction. Let them rather seek God and add His principled righteousness to their endeavors, and live harmoniously beneath the canopy of international spiritual brotherhood. On nations who live in peace with one another, and in pursuit of God-consciousness, the Heavenly Father bestows lasting prosperity, well-earned by aid to the world family, goodwill, and international business cooperation. God, who is the Provider of the cosmos, knows the needs of individuals and nations; if He feeds the raven and clothes the lily, how much more would He provide everything to the individual and the nation who are in tune with His ideals!” 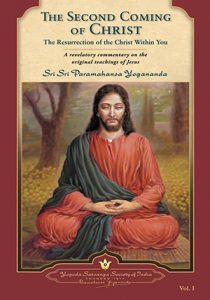 Purchase The Second Coming of Christ at our online bookstore

The state of money-mad modern civilization distinctly shows that selfishness wrecks individual and national happiness. The excessive competitiveness of business life is pernicious because each one tries to take away the possessions of others. Thus in a community of 1,000 each businessperson has 999 enemies and competitors. Jesus urged people to share their possessions with all; when that law is observed, each person in a community of 1,000 has 999 helpers.

“National security and prosperity can never be assured by patriotic and industrial selfishness…. Enduring national prosperity depends not only upon natural resources and the initiative of the nation’s citizens, but primarily upon the moral conduct, harmony, and spiritual living of the people.”

Survival in the present-day cutthroat commercial environment is so demanding that the businessperson is run ragged and is unable to concentrate on making his life truly and spiritually happy. Business is made for the happiness of man; man was not made for business. Only that much enterprise is necessary which does not interfere with the spiritual development of man. Advancement in science and technology is to be applauded when used for the betterment of the human race; but in practical application, nations of the earth could enhance the happiness of their citizens if they advocated a consciousness of plain living and high thinking — concentrating their minds more on spiritual development, inspirational literature, philosophy, knowledge of the wonders and workings of creation, and less on frenetic technologies that encourage money-madness.

If the nations of the earth did not complicate civilization by industrial selfishness, which leads to overproduction and overconsumption in rich countries, and exploitation and parsimony toward weaker nations, then all peoples would have plenty to eat and to live well. But since patriotic selfishness and material superiority are the aims of almost all developed nations, regardless of the needs of their neighbors, the world suffers episodes of chaos and confusion of isms resulting in famine, poverty, and the avoidable miseries of wars. The events that have marked the first half of this twentieth century have manifestly shown that national security and prosperity can never be assured by patriotic and industrial selfishness, which have brought on economic disasters, two world wars, unemployment, fears, insecurity, starvation, and the natural calamities of earthquakes, hurricanes, droughts (which by the operation of mass karma are the indirect offspring of the accumulated evil actions of individuals and nations).

Modern chaotic conditions the world over are the result of ungodly living. Individuals and nations can be protected from self-generated utter destruction if they live by heavenly ideals of brotherhood, industrial cooperation, and international exchange of earthly goods and spiritual experiences. The present economic system of profiteering and exploitation has failed; a brotherhood of nations and a brotherhood of necessary industries and industrialists can alone bring lasting prosperity to the world.

The Great Depression of the 1930s humbled many millionaires who were sure of their financial acumen to preserve their mighty fortunes. Even the shrewdest businessmen became bewildered children in the hands of destiny and depression, knowing not which way to turn. The spiritual laws of “unselfishness” and “including the prosperity of others in one’s own prosperity” were broken; hence, the worldwide collapse of the industrialist economic system. Industrial selfishness was precipitated from dire human greed for gold, leading to unfair suicidal competition and the dumping of prices to destroy the competitor. When the materially minded businessman’s brain is befuddled with greed, his intelligence institutes plans that fail one after the other. This is the price all materialistic God-forgetting egotists are bound to meet sometime or other.

By giving artificial monetary value to industrial production, man has created strife between capital and labor, systematically causing recurrent inflations and depressions. Capital and labor, like brain and limbs, should cooperate for the overall welfare of the body and soul of the nation, rather than fighting each other and thereby ensuring their own mutual destruction. Brain and hands both cooperate to maintain the body and share the food in the stomach; so also capital (the brains of society) and the labor (its hands and feet) must cooperate to make life prosperous and to share the bounty they produce. Neither capital nor labor should get special preference, avoiding the pitfalls of both imperialistic and socialistic forms of government. Capital and labor each has its confirmed place and both must do their respective duties in equality. Everybody should be provided food, clothing, shelter, education, and medical care through sharing of the national wealth; or everybody should equally shoulder the burden of poverty if it comes unavoidably through the inclemencies of nature. There should be no inequitable distribution of basic necessities for a progressive material, mental, and spiritual existence; the have-nots against those who have is the root cause of crime, greed, selfishness, and other untold social evils.

A family member who becomes sick or disabled is not an object of charity, but honorably partakes of the family food and financial means. The same should hold good for each member of the world family. No one should starve because he is unable to find employment or because he is old or disabled. If the nations of the earth wanted to please God, they would live according to Christlike principles as brothers in a United States of the World, exchanging commodities so that no individual would suffer from lack, famine, or poverty.

It is imperative now that individuals and nations forsake selfishness to feed and clothe the international body. National citizenry should subdue preoccupation with self-interest and learn to acquire wisdom, and to meditate and be in tune with the Infinite, so that they collectively feed the national soul with all-round happiness. Nations living in tune with God and His ideals of brotherhood and peace can endure for centuries without wars or famine, in perpetual prosperity and spiritual happiness. Nations who are rich in prosperity but lacking in wisdom and God-bliss may lose their top-heavy materiality through civil war, fights between capital and labor, and troubles with envious neighbors jealous of their prosperity. One nation possessing abundance side by side with another nation starving to death can never be a formula productive of peace on earth.

Nations must look after one another or they are doomed. That is why Jesus speaks to the nations of the earth: “O you nations, do not be selfish and think only of food, industry, and raiment, in utter forgetfulness of brotherhood and God, the Giver of all things, or you will bring self-created disaster on yourselves through your ignorance and its attendant wars, pestilence, and other miseries.”

Prosperity often dulls the social conscience: “What do we care for other nations: we worked to create our prosperity so that we could roll in plenty! Why should they not do the same?” Callous arrogance is shortsighted. Enduring national prosperity depends not only upon natural resources and the initiative of the nation’s citizens, but primarily upon the moral conduct, harmony, and spiritual living of the people. No matter how successful a nation may be, if it becomes debauched, selfish, and inharmonious, it will have civil wars, treachery, and foreign aggression to disrupt its complacency and good fortune.

Hence, the admonition of Jesus that no individual or nation should be selfish and give entire thought to food or raiment or acquirement of earthly treasure, but should be humble, share prosperity with needy brothers, and acknowledge God as the only Owner and Giver of all the gifts of the earth.

Spiritual Light for These Challenging Times