Chanting for Deep Meditation With Paramahansaji 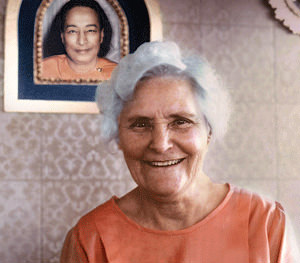 Durga Mata (1903-1993) was one of the early close disciples of Paramahansa Yogananda, and played a unique role in the establishment of his worldwide work. Along with others of the great Master’s “first generation” of disciples, Durga Mata was privileged to serve him personally for many years and to absorb the spirit of devotional chanting from him firsthand.

Durga Mata and other disciples were privileged to accompany the Guru on occasional outings to some wilderness area as a break from the daily routine. She often described one such occasion when meeting with devotees for chanting and meditation:

“I remember once when Master went to Palm Canyon, in the desert near Palm Springs, with a group of devotees. We went down into that canyon and meditated; and Master went into a very deep samadhi. I wasn’t near him; I was meditating on a rock alone. After some time, he called us all together to return to the housecar. As he walked along the path through the canyon, I was close behind him. Suddenly I felt a tremendous stillness emanating from him. It wasn’t from within me; it was coming from him. I was close enough to be in the aura of his vibrations. Immediately it lifted me into a state of deep, transcendent stillness. I continued walking, and was conscious of everything around me – seeing the stones in the path that I had to step over – and yet I wasn’t feeling my body at all. There was only this feeling of omnipresent stillness; I was not conscious that I was in the body at all.

“Then Master turned around to me and said: ‘Pick up some wood.’ We had to make a fire. I got my load of wood and walked with my load of wood – but didn’t lose one single bit of that bliss-filled stillness. My mind was calm and still – there was no ripple of restlessness or thought, and yet I could see and feel everything. When we reached the housecar, I put down the wood I was carrying, and then he turned to me and said: ‘Stillness is God.’

“It was a great lesson. We are made in the image of God; and as Master used to say: ‘God is right here, right within us. Why don’t you see Him? Because you are looking everywhere else.’ You can find Him today, tomorrow, anytime, as long as you turn your consciousness within and hold it within, and not constantly throw it outside.”

Durga Mata often met with groups of devotees in the Self-Realization Fellowship ashrams to share the personal training she received from Paramahansa Yogananda about the art of spiritual chanting. These gatherings provided an opportunity for the disciples to learn not only the words and melodies of the Master’s chants, but also the art of chanting with concentration, understanding, and devotion. Following is a compilation of her comments on these occasions:

“Chanting is a wonderful method to help us calm and interiorize the mind… a method to help us settle the muddy sediment of restlessness and psychological debris, so that we can clearly perceive Truth, or God.”

“Chanting, Master used to tell us, is one of the ways of realizing God…. When we chant, we try to control the mind and concentrate it one-pointedly on the thought expressed in the words of the chant. Then when the chanting is over, you are more easily able to go into silent meditation, beyond manifestations of thought, chanting, voices, or anything. That’s the only time God can come: in the calmness and interior stillness of mind.

“When Master composed these chants, he used to repeat them over and over again until, as he said, they would become ‘spiritualized.’ What he meant was that he chanted them repeatedly until he had realized through actual experience the spiritual perception behind every word that he put into these chants. He chanted them not with just his voice, but with his heart and mind and especially his soul. And when we chanted with him, if we really threw ourselves into the chanting, his spiritualized perceptions overflowed from his consciousness into our own, giving us a glimpse of the wondrous blissful communion he was experiencing.”

Back To Disciples Reminisce Main Page